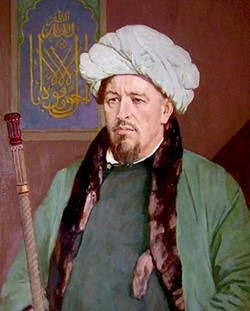 He was born in January 16, 1818 in the family of the mudarris of Yabynchy village, Kazan district, Kazan province. He received his primary education at home, then went on studying at the Tashkichu village madrasah, where he stayed to teach till 1835. Between 1838 and 1849, he studied at madrasahs “Kukeldash” and “Mir Arab” (Bukhara), Shirdar (Samarkand). At the same time, he took lessons from reputable scholars and studied in libraries the works of famous representatives of Arab-Muslim science and literature such as Ibn Sina, Ibn al-Arabi, Ibn Rushd, al-Suyuti, Abu Hamid al-Ghazali, al-Shahrastani, Ibn Khaldun, etc. He wrote several treatises on logic and principles of jurisprudence, including commentary on the preface of the treatise “ash-Shamsia by al-Katibi”, “at-Tariqa al-musla wa-l-aqida al-husna” (Exemplary method and the best dogma, 1890). As well as critical review on the methods of teaching the natural sciences in Bukhara “Aglam abnai ad-dahr bi-ahwali ahl Mawarannahr” (Notification of the sons of the era about the situation of the inhabitants of Mawarannahr; the manuscript has not survived).

Marjani was also involved in the collection and cataloguing other historical manuscripts and documents, some of which were later incorporated into his works. Probably Marjani influenced by Samarkand teacher and qadi Abu Said had ideas of religious reformism. In Bukhara, he became acquainted with the mystical and ascetic movement in Islam, Sufism, became a murid of three sheikhs-mentors of the Naqshbandi order, Ubaidullah ibn Niyazkuli, Abdelqadir al-Faruqi al-Hindi, Mazhar ibn Ahmad al-Hindi, received ijazah – the license to be spiritual educator. He was appointed imam khatib and mudarris of the First Kazan Mosque after returning to his homeland in 1850 (with interruptions in 1854 and 1874 due to disagreements with Salimgarey Tevkelev the Mufti of the Orenburg Mohammedan Spiritual Assembly and the Tatar merchant-philanthropist Ibrahim Yunusov). At the same time, Marjani has been supervising the completeness and accuracy of the text of the Kazan editions of the Quran (Kazan Basmasy) since 1860. Following that, he published his book “al-Fawaid al-Muhimma” (Useful and important, 1878), which was dedicated to the history of the Quran’s publication in Russia.

Marjani’s nomination for the position of mufti – head of the Muslim Spiritual Board – was made in 1862, but it was rejected by Konstantin Pobedonostsev, Ober-Procurator of the Most Holy Synod. Marjani served as Kazan’s akhund and muhtasib in 1867–1868. He was the first member of the Muslim clergy to teach Islamic dogma at the Kazan Tatar Teachers’ School between 1876 and 1884. Marjani was elected a member of the Society of Archeology, History and Ethnography at Kazan University in 1876. He was the first of the Tatar scholars to present a report on the history of Bolgar and Kazan at the Fourth Archaeological Congress in 1877 (the report was later published under the title “Gilalat az-zaman fi tarikh Bolgar wa Kazan” (The veil of time on the history of Bolgar and Kazan). Marjani traveled to Moscow and Mecca several times in 1880. On his travels, he stopped in Kyiv, Odessa, Istanbul, Cairo, and other cities, where he had meetings with eminent Islamic scholars and politicians.

One of the main objectives of Marjani’s madrasah classes, which were based on the principles of his own pedagogical concept, was the development of his students’ capacity for independent thought. He pushed for the inclusion of Russian language instruction and the study of the natural sciences in the mekteb (Muslim primary school) curriculum. Marjani was regarded as a great teacher by an entire generation of Jadids in the late 19th and early 20th centuries. He worked on adaption of Islam to the shifting world and the development of the Tatar people’s national identity in his theological writings and educational endeavors. Marjani, who emphasized that Shiites were also Muslims (Kazan Muslims did not recognize them as such), issued a fatwa allowing the Tatars to marry their daughters off to Iranian Shiites. He argued that some provisions of fiqh needed to be revised.

In 1870, Marjani published the polemical treatise “Nazurat al-haqq fi fardiyat al-gishai wa in lam yagib ash-shafaq” (A look at the truth about the necessity of evening prayer regardless of the onset of twilight), which caused a great resonance and made the author famous in the Muslim East. He left a deep mark in historical science. One of his first works, Girfat al-khavaqin li-ʼirfat al-khavatin (A handful of knowledge about the knowledge of the Khakans, 1864), is devoted to the history of the Turkic peoples of Central Asia in the 10th-12th centuries. He prepared a 6-volume collection of biographies of notable Muslim figures “Wafiyat al-aslaf wa tahiyat al-akhlaf” (Sufficient about the ancestors and greetings to descendants, in manuscript). To this work, Marjani wrote introduction “Muqaddimat kitab wafiyat al-aslaf wa tahiyat al-akhlaf” (Introduction to ‘Sufficient about the ancestors and greetings to descendants’, 1883), a work that included a biography of the Prophet Muhammad (sas), the history of early Islam, an overview of Muslim theological science. In the second volume of this work, Marjani emphasized the history of Islam’s assimilation into the Volga region as well as the contributions that the most prominent Muslims in the area made to Islamic culture. The author revealed the history of the Muslims of the Volga region as a part of the Russian state in volume 6, which spans the time from the second half of the 17th century to the third quarter of the 19th century. He paid special attention to Muslim intellectuals because they were crucial in forming the Tatars’ spiritual perception. Another historical work by Marjani, “Mustafad al-akhbar fi ahwali Kazan wa Bolgar” (Useful information about Kazan and Bolgar), contains historical and biographical information about many dynasties and individuals, extracted from Arabic, Persian and Turkic sources, data epigraphy and numismatics, oral reports, folklore. It represented the first attempt to write a work about the history of the Tatar people.

Marjani died in April 18, 1889, and was buried in the cemetery of the New Tatar Settlement in Kazan.