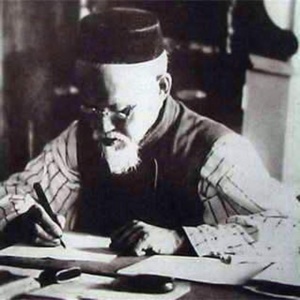 He was born in January 17, 1859 in Kichuchatovo village, Bugulma district, Samara province. He began teaching after graduating from the madrasah in Nizhnie Chershily village; in 1887, he passed the test for the position of imam. He was the imam khatib of a mosque in Ilbyakovo village, Bugulma district, from 1889 to 1891. In 1891, he was elected qadi of the Orenburg Mohammedan Spiritual Assembly, where he organized the assembly’s archive, laid the groundwork for the archeographic processing of its funds, and published the most valuable documents. During the same time period, he wrote his bio-bibliographic book Asar, which contains information about prominent names from the Volga Bulgarian period till the beginning of the 20th century.

Fakhreddin moved to Orenburg in 1906 at the invitation of the Ramiev brothers, where he worked in the Waqyt newspaper (Time); from 1908 to 1918, he was the editor-in-chief of the Shura magazine and directed Madrasah Husainiya. Fakhreddin advocated for the advancement of scientific knowledge, the reform of Muslim education, and the preservation of Tatar history, culture, and philosophy, as well as Muslim issues in Russia. During this time, he published “The Needs of Muslims in Russia and Their Criticism” (Orenburg, 1906), “State Administration of Muslims” (Orenburg, 1907), and other works. During the pre-revolutionary period, Fakhreddin published over 60 books and over 700 articles in newspapers and magazines. In 1918, he moved to Ufa.

Fakhreddin has been the mufti of the Central Spiritual Assembly of Muslims of Inner Russia and Siberia since 1922. On his initiative, the Spiritual Assembly began publishing the Islam Majallase (Islamic Collection) journal in 1923. As an honored guest, he attended the celebrations dedicated to the 200th anniversary of the Academy of Sciences in 1925. Fakhreddin led the Soviet delegation to the World Congress of Muslims in Mecca in 1926, where he was elected Vice President of the Congress. He is the author of works on Muslim social life and their position in Russia, history and Muslim philosophy, interpretations of Shariah and Hadith provisions, and the foundations of ethics, morality, and pedagogy. He died in Ufa in April 11, 1936.