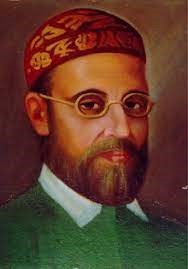 Husayn Faizkhanov was a historian, philologist, and teacher.

He was born in 1823 (according to some sources, in 1828) in a peasant family in Sabachay village (Sobachiy Ostrov), Kurmysh district, Simbirsk province. He received his primary education in the kuttab of his native village and Baraska village. Then, from 1848 to 1853, he studied at the Marjani Madrasah in Kazan. He actively collaborated with Kazan University orientalists Ilya Berezin and Alexander Kazembek in the late 1840s, and since 1854 with Bernhard Dorn, Vladimir Velyaminov-Zernov, Marie-Félicité Brosset, and Ernst-Eduard Kunick. Since 1854, Faizkhanov lectured at the Faculty of Oriental Languages of St. Petersburg University. In 1858, he described the texts of medieval Turkic-language documents from the archives of the Ministry of Foreign Affairs in Moscow on behalf of the Academy of Sciences, identifying 378 texts (they were published as a separate book Materials for the History of the Crimean Khanate, 1864, edited by Velyaminov-Zernov). On the commands of the Russian Archaeological Society, he copied texts from Tatar tombstones in Kasimov city in 1860. Faizkhanov’s discovery of 29 epigraphic texts significantly expanded the source base for the history of the Kasimov Khanate; they are included in the book of Velyaminov-Zernov Studies on the Kasimov Tsars and Princes (parts 1-4, St. Petersburg, 1863-1887). Faizkhanov discovered new Bulgarian epitaphs in the villages Tarkhany and Uryum in 1862, and described them in his article Three Bulgar Gravestone Inscriptions in the journal News of the Russian Archaeographic Society (1863). Faizkhanov was the first to correctly decipher and interpret the components of the Bulgar epitaphs containing elements of the Chuvash language. At the same time, he was involved in the collection and description of Arabic manuscripts (which were stored in the library of St. Petersburg University), materials on the history of Tatars, the Kazan and Crimean khanates. He made one of the first attempts to develop the problem of the ethnogenesis of Tatar people. Faizkhanov published Short Grammar of the Tatar Language in 1862, using the lithographic method, with an annex containing his Tatar translation of a part of the of Persian-Arabic literatury monument Kalila wa Dimna, the text of the letter of the Crimean Khan Dzhanibek-Girey (XVII century), and an excerpt from Alisher Navoi’s poem Majalis an-nafis.

Faizkhanov is the author of the draft reform of Muslim education: in his work Islah al-Madaris (1862), he was the first of the Tatar enlighteners to conclude that European methods of fundamentals and secular sciences needed to be transferred to Tatar educational system. Faizkhanov is the author of works on the history of the Kasimov, Kazan, Crimean khanates, Turkic philology, Bulgarian epigraphy. The results of his scientific research formed the basis of the multivolume fundamental works of Velyaminov-Zernov and Shihabutdin Marjani. He died in August 28, 1866 and was buried in Safazhai village (Krasnaya Gorka).