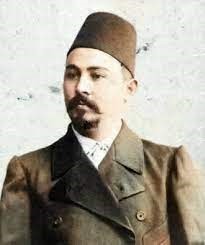 Ahmed-Hadi Maqsoudi was a public and political figure, teacher, and journalist.

He was born on September 28, 1868 in Tashsu village, Kazan district of the Kazan province, in the family of a mullah. A descendent of Tatar murza Syundyukovs. From 1881, he lived in Kazan. In 1890, he graduated from Madrasah Qasimiya (Apanaevsky), and worked there until 1892.

Being a follower of Galimjan Barudi, he was one of the first to adhere to the newfangled principles of teaching. In 1893, at the invitation of Ismail Gasprinsky, he came to Crimea, taught Arabic language and logic for shakirds in the Zyndzhyrly Madrasah (Bakhchisaray), collaborated with the Tardzheman newspaper. In 1896, he returned to Kazan, externally passed the exams at the Kazan Tatar teacher’s school and taught at Madrasah Muhammadiya. In the late 1890s, Maqsoudi worked as a teacher of Tatar language, history and geography in the kuttab of the Yunusov Brothers Muslim Orphanage, and the First City Primary School. In 1903-1905, he was a volunteer student at Kazan University.

Being a councilor of the Kazan City Duma, Maqsoudi was able to found the first Tatar public library in Kazan in 1906, Kutupkhanai Islamia, which he managed until 1923. Ahmed-Hadi and his brother Sadri were among the leaders of the Muslim liberal democratic party Ittifaq al-Muslimin. At the Third All-Russian Congress of Muslims (Nizhny Novgorod, August 1906), Ahmed-Hadi Maqsoudi was elected to the Central Committee and the Central Bureau of the Party; at the All-Russian Congress of Muslim Public Organizations (Petrograd, December 1914), he was elected to the Central Committee of the Russian Muslim Public Organizations. He took part in the First (Moscow, May 1917) and Second (Kazan, July-August 1917) All-Russian Muslim Congresses. At the latter, he was elected to the Millet Majlisi and became a member of the Commission on Public Education Milli Idare. In 1925-1930, he taught Arabic at the Oriental Pedagogical Institute.

In 1927-1928, Maqsoudi began a large-scale work on the publication of his book Fanny Kamus (Scientific Dictionary), which was basically an explanatory dictionary of scientific and socio-political terms. Maqsoudi was arrested and convicted twice in 1933 and 1938, acquitted and released in 1939. He died on June 28, 1941, and was buried at the cemetery of the New Tatar Settlement in Kazan.