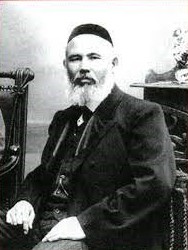 Abdurashid Ibragimov was a religious figure, publicist and qadi.

He was born in April 23, 1857 in Tara, Tobolsk province, in the family of a mullah. He received primary education at home, since 1867 he studied at the madrasah of Almenevo town. At the age of 17, he became an orphan and left for Tyumen city, where he continued his studies at the Yana Awyl madrasah, then at the madrasah of Kshkar town. In 1878-1879, he taught in the Akmola region. In 1879 – 1885, he continued his education in Medina, Mecca and Istanbul, returned to Russia in 1885. Since 1885, he served as imam khatib of the cathedral mosque in Tara, where he was also a teacher in the local madrasah. In 1892 – 1894, Ibragimov served as qadi of the Orenburg Mohammedan Spiritual Assembly.

In 1897 – 1900, he traveled from Istanbul to Egypt, Palestine and Hijaz, then to France, Italy, Austria, Serbia, Bulgaria, through the south of Russia to the Caucasus, along the Caspian coast to Bukhara, Turkestan, Semirechie region. In Istanbul, he published his book Morning Star, the book was banned in Russia due to its sharp criticism of the Russification policy of tsarism towards Muslims, but it continued to be distributed illegally. Since 1900, in his printing house in St. Petersburg, he published the Mir’at magazine (Mirror, 1900–1909), the Olfat newspaper (Friendship, 1905–1907), the Najat magazine (Salvation, 1907) and the Arabic newspaper at-Tilmiz (Pupil, 1906-1907). In 1905-1906, Ibragimov took part in the work of the Ittifaq al-Muslimin congresses, was a member of the Central Committee of this party, and participated in the development of its program documents.

In 1907, he was forced to sell the printing house and set off on a journey: East Turkestan, Samarkand, Bukhara, Semirechye. In 1908, he went on a long trip to the countries of Southeast Asia, delivered lectures on Islam in Japan, and met Prince Itō. In 1909, with the aim of spreading Islam among the Japanese in Tokyo on the initiative of Ibragimov, the Islamic Trade Society was established. In 1911, during the Italian war against Turkey for the seizure of its North African possessions, Ibragimov secretly came to Tripoli to help the fighting Muslims, fought for the unification of Muslim organizations to provide armed resistance. During World War I, he participated in actions to protect the interests of the Austro-German bloc, which included Turkey. In 1917 – 1921, he was in Russia, pinned his hopes on the Soviet government in solving the problems of Muslim peoples. In 1922 – 1933, he lived in Turkey, and after 1933, he lived in Japan. In 1937, a cathedral mosque was built in Tokyo on his initiative, in which he became imam khatib. He died in Tokyo in August 17, 1944.